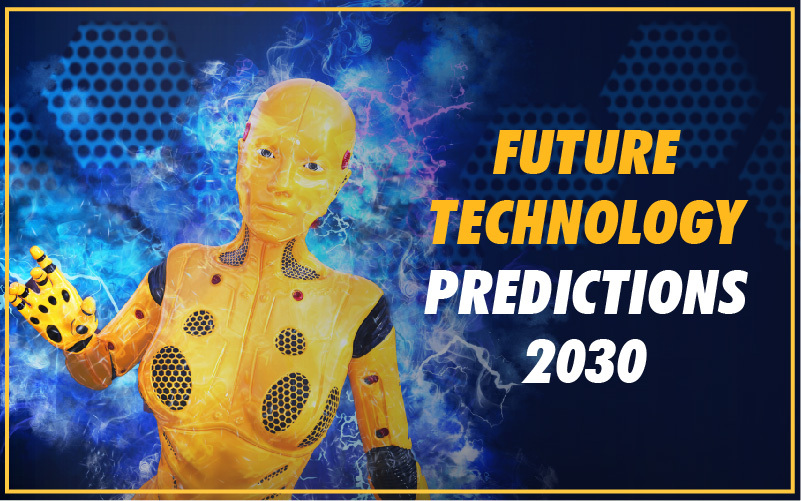 Technology is the destiny of future generations; it is defining and will soon totally swallow the entire world. This phase includes a variety of emerging technologies that will fundamentally transform the globe by 2030. Some of the top future technology predictions 2030, will provide you with an exact image of the changes that will be made.

Take Over of Artificial Intelligence

Artificial intelligence is a new trend that is affecting computers, robotics, voice assistants, and a variety of other sectors.It is altering the future outlook of every industry and individual. Artificial intelligence is at the foundation of several other technological advances, including big data, robotics, and the Internet of Things. It will undoubtedly develop and become a technical innovator in the future.

Used by many professionals for policymaking, strategy development, and decision-making. It has already begun to have an impact on the world, as many firms are investing in this technology because it is the most efficient technique because there are fewer chances of errors. According to Statista, there were 2,028 AI companies in the United States in 2018, with forecasts predicting that number to reach 9,000 by 2030.

Artificial intelligence, machine vision, sensors, motors, hydraulics, and materials, among other emerging technologies, will change how things are delivered. Many restaurants and businesses in the United States employ robots, but by 2030, the world will be fully robotic.

Robots may be able to replace up to 20 million manufacturing jobs by 2030, according to Oxford Economics. These 2030 future forecasts might assist you in understanding the numerous components to the best of your ability.

Space Travel will be the reality

Advancement in technology will surely make space travel a big reality. Many companies, including Blue Origin, SpaceX, and Virgin Galactic, are working on suborbital tourism spacecraft today. For future generations, this will signal the advent of fresh opportunities.

According to documents, businesses will begin testing the first tourist vehicle in 2030, with the first official space flight following in 2050. Therefore, space travel will be the best reality as per the future technology predictions 2030.

This technology refers to the provision of internet-based storage, access, and consumption of computing resources. It is possible to have a private, public, or hybrid cloud. According to many estimates, 70 percent of US businesses are already using the cloud, and the rest are anticipated to follow the same.Cloud computing will be grown so widely by 2030 that it would be difficult to remember a time when it did not exist.

Because Smart Glasses are a new generation of wearable glasses, Augmented Reality (AR) will be at its maximum until 2030. Because Smart Glasses are a new type of media gadget, they connect the virtual and physical worlds. According to recent projections, the market for these glasses will begin to grow in 2025, and the market for smart glasses will reach its peak in 2030.

As a result, it is apparent that Technology will significantly expand its scope in comparison to now. Future technology predictions 2030  best summarize the above-mentioned criteria. Please get in touch with us if you require any other related information. You can also submit a guest post technology category to share your thoughts.